These are thought-provoking words.  What do they mean?  How do we use such words?

John, in his gospel, wrote that "The Word became flesh, and made his dwelling among us.  We have seen his glory, the glory of the One and Only, who came from the Father, full of grace and truth" (John 1:14).  'Grace' is a generous word.  It is filled with images of peace and contentment, favor and thankfulness, joy and abundance, life and goodness.  Grace is gift, and Grace leads us to gratitude. 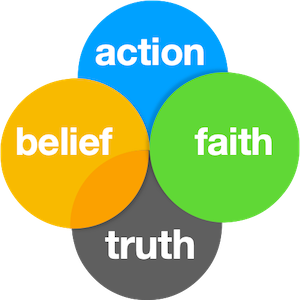 Early on in his ministry, Jesus was walking the dusty road from Judea to Galilee tired and thirsty in the heat of midday.  He stopped at Jacob's well in Samaria. A Samaritan woman came to draw water from the ancient, deep well; to pull up a bucket of water was itself a tiresome task.  Jesus asked her for a drink.  She was taken aback!  Jews looked down on the Samaritans, they were ignorant outsiders, different, despised.  John does not tell us in his recounting this story (John 4:1-26) whether she ever gave Jesus a drink of water.  Instead he tells us that Jesus offered to give her "living water".  The water that Jesus - who himself is God's gift to us - gives is "water that becomes a spring of water welling up to eternal life."  Instead of dropping our buckets deep into a well to pull up a drink of water after which we still need another drink, we ourselves will be a spring of water, no buckets needed.

Jesus continues to speak with this estranged woman, answering her questions about God and worship, the kind of true worship offered to the Father, worship in spirit and in truth.  Much later, having come into the world, having lived a life that - whatever else we may think of Jesus - was incomparable in its love for God and neighbor, he was brought to trial before the representative of Imperial authority, the Roman governor Pilate.  Pilate asked if it was true that he, Jesus, was the "the king of the Jews?"  Jesus acknowledged the truth of the charge, though not in the way Pilate understood it.  "…I am a king," Jesus said.  "In fact, for this reason I was born, and for this I came into the world, to testify to the truth."  Pilate's response anticipates our 21st Century post-modern response:  "What is truth?"

In our contemporary world we usually think of 'truth' as an assertion that corresponds with reality.  And such it is, as Jesus' encounter with Pilate demonstrated.  But truth is not simply a statement pointing to a reality, Truth is reality!  This is what John was trying to say in his gospel, and it is what Jesus said to his disciples:  "I am the way and the truth and the life" (John 14:6).   Life and truth and the way to God are inextricably intertwined.  Faith is an exercise of the will that leads to action, a doing of that which demonstrates the character of God as the Giver of all good gifts.  We act out of our faith in Jesus as the Truth, a reality that is personal and life-giving.

We listen to, learn from and lead with God's people in different cultures and contexts, teaching the values of God's Kingdom, transforming and growing thriving communities to serve and preserve God's Creation.

The story is awash with meaning.  The setting was the Passover Feast in Jerusalem, the city where God had placed his Name, the city where the Jews gathered for worship in the temple where God dwelled in the midst of his people. And where, at Passover, they remembered God's great act of deliverance from slavery in Egypt thirteen centuries earlier.  The month of that first passover would subsequently become the first month in the Jewish calendar.  God's people took innocent lambs without any defects, if needed sharing a lamb between families, sacrificed them, painted doorposts of their homes with the lamb's blood, ate together in haste the roasted meat and bitter herbs, bread baked without leaven, sandals already on their feet and staffs in hand, cloaks tucked into their belts, readly to be delivered from four hundred years of slavery (see Exodus 12). 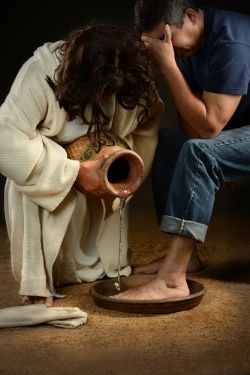 John tells us that Jesus knew he was about to leave this earthly world and return to his Father in heaven.  [The ancient Jewish cosmos was ordered in three tiers:  heavens - the home of God and the gods (other spiritual beings); earth - where we are born, live, work and die; and under the earth - the realm of the dead.]  He wanted to leave his disciples an example so that, after his death, resurrection and ascension, they would live by the pattern of his life.  His life was lived serving others, so he showed them - in John's words - "the full extent of his love".  Jesus, their rabbi, their teacher, washed and dried their feet.  It was a shocking thing to do, an act of humility, the work of servants.

Jesus was gathered with the disciples for a meal, reclining on mats or cushions around the table.  The text makes Jesus' intention and action clear:  "Jesus knew that the Father had put all things under his power, and that he had come from God and was returning to God; so…he began to wash his disciples' feet, drying them with the towel…" (John 13:3-5).  The roads of Judea and streets of Jerusalem were dusty, feet dirty.  A gracious host would provide water for his visitors to wash their feet; possibly a servant would perform the hospitiable act for a guest.  For the host, the Master, the Teacher, to get up from the dinner table, remove his outer clothing, wash his disciples feet was an act of utter downward mobility!  It was inconceivable that One who was God, was with God, had come from God, and was returning to God, would take the position of a servant, would wash and dry the dirty feet of his followers.  Yet that was what Jesus did at that dinner table on that night in Jerusalem.

RiverWind subscribes to a "Statement of Beliefs and Missional Commitments" that guide our work in Peru.  They are not simply words written and stored in a digital world, but commitments to live, behave and serve in everday life.  We invite you to consider TRUTH.